The #1 place in Puerto Vallarta for up-to-date safety information and coverage.

You can find statements on both sides made to support their theories about safety in Mexico, but most are skewed and many are blatantly false.  Unlike those statements, all of our information is cited from reliable sources, mostly government agencies in the U.S. and Canada.

CUT THROUGH THE HYPE

Q:  WHAT IS THIS "DRUG WAR" I KEEP HEARING ABOUT?
A:  Since President Calderon was elected in 2006, the Mexican government has been cracking down on the drug cartels that have always existed in Mexico in an effort to stomp out drug trafficking to the United States. As the government arrests or kills cartel leaders, various battles for turf between the cartels to fill the void have opened up.  Over 90% of the deaths in the drug war have been from members of the drug trade 1.  7% have been the Mexican government. 2  None have involved U.S. or Canadian tourists in any of the major resort destinations in Mexico, including Puerto Vallarta. 3

Q:  SHOULD I WORRY ABOUT DRUG CARTEL VIOLENCE IN PUERTO VALLARTA?
A:  There are zero U.S. or Canadian citizens who have been victims of drug cartel violence in Puerto Vallarta.1 The vast majority of the stories you have been hearing about are taking place right along the U.S.-Mexico border, most notably in the areas of Ciudad Juarez, Nuevo Loredo and Heroica Nogales, far closer to most Americans homes than to Puerto Vallarta, which lies over 1,000 miles to the south.  Mexico is a big country, the 14th largest in the world.  Being spooked by something happening "in Mexico" makes no more sense than reading something happened somewhere "in the United States" and fearing for your life as you go to work that day.  You have to see where in Mexico it happened to see if it is relevant to you.  See the table below.

Q:  BUT DIDN'T THE U.S. JUST ISSUE A TRAVEL WARNING FOR PUERTO VALLARTA?
A:  No.  The travel warning dated February 8, 2012 includes only the areas bordering the states of Michoac�n and Zacatecas, which are over 300 miles from Puerto Vallarta.

Regarding the neighboring state of Nayarit where Nuevo Vallarta, Bucerias and Punta Mita are located, it specifically states ""There is no recommendation against travel either to Riviera Nayarit in the southern portion of [Nayarit] state or to principal highways in the southern portion of the state used to travel from Guadalajara to Puerto Vallarta".

See a map of the areas discussed by the U.S. State Department here: 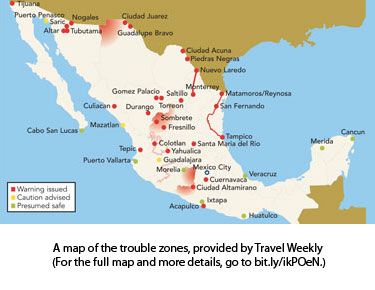 You will note that Puerto Vallarta has a green dot, as do the other major resorts of Cabo San Lucas, Huatulco and Cancun, indicating "Presumed Safe".  See the article here.  In addition, seldom-quoted parts of the travel warning include:

"Millions of U.S. citizens safely visit Mexico each year for study, tourism, and business, including more than 150,000 who cross the border every day.  The Mexican government makes a considerable effort to protect U.S. citizens and other visitors to major tourist destinations, and there is no evidence that Transnational Criminal Organizations (TCOs) have targeted U.S. visitors and residents based on their nationality.  Resort areas and tourist destinations in Mexico generally do not see the levels of drug-related violence and crime reported in the border region and in areas along major trafficking routes.".

Q:  BUT I'VE HEARD THAT U.S. AND CANADIAN CITIZENS HAVE BEEN KILLED?
A:  Exactly zero U.S. or Canadian Citizens were killed in Puerto Vallarta in all of 2010, out of the 1.5 million visiting  tourists and 50,000 expats living here.  See the table below.

In fact, in 2010, there were exactly 2 U.S. Citizens killed in all of the major tourist destinations in Mexico put together - one in Cancun (by her American husband) 1,2 and one outside of Acapulco (a resident, by the military) 3.  A grand total of zero for Riviera Maya, Puerto Vallarta, Mazatlan, Cabo San Lucas and Cozumel combined.4  Zero homicides committed against a tourist by a Mexican in any major Mexican resort town in all of 2010 out of approximately 6 million visitors every year to these locations.  It just doesn't get safer than that.  Compare your hometown's homicide statistics here.

In June, 2011, the blogosphere erupted because a Canadian citizen who had lived in Puerto Vallarta full-time for six years (not a tourist), was killed during a home burglary by someone he apparently knew 4.  The intruder made off with over $20,000 in cash.  Over 600 Canadians each year suffer a similar fate...in Canada.  This is the lone incident in Puerto Vallarta against any U.S. or Canadian citizen in 2011, and it was not a tourist.

Q:  BUT WHAT ABOUT THAT ROBBERY OF CRUISE PASSENGERS THAT IS ALL OVER THE NEWS AND BLOGS?
A:  In February, 2012, the media again erupted with wall to wall coverage of reports of armed gangs robbing cruise passengers in the city of Puerto Vallarta.  However, like many of today's media reports, these later were revealed to be inaccurate. It was quickly revealed that a group of cruise passengers on a cruise-sponsored jungle tour were walking on an unauthorized side trail through the jungle well outside of the city at 5:00 PM, well past the time when these excursions are supposed to run, when a lone gunman (not a gang) mugged them. Nobody was hurt, all passengers returned safely, and the cruise line has dropped the excursion during the investigation.

This isolated incident is the first such group mugging of tourists on record in Puerto Vallarta - ever.  In fact, it appears to be the first such incident on record in any of the port cities in Mexico, the world's most visited cruise destination, ever.  The same cannot be said for other popular cruise destinations, including St. Kitts 9, Antigua 10, Jamaica 11, The Bahamas 12 13 14, St. Lucia 15, Guatemala 16, Costa Rica 17,  Italy 18, Bermuda 19, and yes, the United States 21 22 and it's territories, 23  all of which have experienced violent crime against cruise passengers in recent years.  Of course, virtually all crime against cruise passengers still occurs on the cruise ship itself, not in any port city.

That said, travel in general is very safe, and incredibly safe for visitors to the tourist resorts and port cities of Mexico.  Crime against tourists is staggeringly rare.  These isolated reports are blown into countrywide epidemics if they occur in Mexico, one of the world's largest countries, but the statistics speak a very different story.  22 Million Visitors to Mexico every year, including approximately 2 million to Puerto Vallarta.  Think how many crimes would occur in any American city of that size in a year.  Hundreds of Thousands, or even Millions.  Staggeringly rare.  That is why it is almost impossible to find any visitor to Puerto Vallarta who feels anything but safe when visiting here.

Q:  THEN WHY ARE CRUISE SHIPS PULLING OUT OF PUERTO VALLARTA?
A:  Economics.  Cruise ships have cited "the perception" 1 of violence in Mexico as one of the reasons for bookings on their Mexican Riviera cruises being down 21% 2 over the past two years.  Don't take our word for it - here are the actual reasons cited by the cruise lines for their decisions to leave the Mexican Riviera cruise route - not from ranting blogs or forums or flashy newspaper or cable TV headlines, but direct quotes from top officials at the cruise lines themselves:

Royal Caribbean Cruise Lines
"We�re looking to maximize our profits,� said Harrison Liu, a spokesman for the cruise line, owned by Miami-based Royal Caribbean Cruises Ltd. �Both Europe and the Caribbean are hotter tickets than the Mexican Riviera, and there�s a stable market out of Galveston.�  In a blog addressing the issue, company Chief Executive Adam Goldstein explained further. �There is no question that there are tens of thousands of loyal Royal Caribbean cruisers who live in the Western U.S. and cruise on Mariner of the Seas,� Goldstein wrote. �Yet the ship does not perform at an acceptable level to be able to remain in California.�3

Carnival Cruise Lines
Since Carnival Cruise Lines announced the move of the Carnival Spirit to Australia, the story has been painted that the line is abandoning the West Coast, but that is not the reality, according to Terry Thornton, senior vice president of marketing planning. �We have right-sized our capacity on the West Coast due to less than the best economic results,� he explained. However, Carnival will continue to have three ships on Mexican Riviera cruises � two year-round and one seasonally � until fall 2012, so the brand remains the largest single cruise line in the market, and will continue to have two ships after that".  4

Princess Cruise Lines
Citing shifting market demand on the West Coast, Princess Cruises will eliminate 15 Mexican Riviera cruises in 2010-2011, replacing them with additional Hawaii cruises and two Pacific crossings between California and Sydney.   "It's a matter of demand," said Princess spokeswoman Julie Benson. "We deploy our ships where we believe they will be most successful, and right now we see more demand for a longer, more exotic deployment over seven-day Mexican Riviera." 5

Crystal Cruises
"The beauty of a floating resort is that you can move your hotel to other destinations when there is demand," Bill Smith, senior vice president of sales and marketing, said in a statement. "We are keeping several fall 2010 itineraries through the Mexican Riviera, in addition to others in spring and fall 2011; the West Coast and Northwest itineraries add dimension and scope to the worldwide destinations we're offering in 2011." 6

Q:  SO ARE YOU SAYING THERE IS NO CRIME AT ALL IN PUERTO VALLARTA?
A:  Of course there is some crime in Puerto Vallarta, just virtually none against tourists, and very little compared to most American cities.  Every city, big or small, has crime.  But, just like in your hometown, almost all of it tends to happen behind closed doors, between criminals and people that know each other, or in bad parts of town, not tourist areas or places visited by tourists, so really overall crime rate is a very poor representation of safety in any tourist destination.

For example, just because Washington D.C. has one of the highest violent crime rates in the United States (much higher than Mexico) doesn't mean that you can't go visit the Washington Monument and the Smithsonian without looking over your shoulder.  Likewise just because Jamaica has one of the highest homicide rates in the world (far higher than Mexico) doesn't mean you need to worry about going and relaxing at your favorite beach resort in Montego Bay or stopping there on a cruise stop and enjoying your favorite excursion.  Just don't get involved in drugs or crime and go places that make sense for you to be.  Just like you do at home.

THE HEADLINES YOU DON'T HEAR ABOUT

These are the facts as they stand right now regarding safety in Puerto Vallarta.  Never depend on the ratings-based cable news channels or bloggers who don't live anywhere near Puerto Vallarta for your information, it is the least reliable source of verifiable information.  Other than the current local information you see above, check with your travel agent, the local consulate for your country serving Puerto Vallarta, or find current reports from locals and current visitors on various internet forums for Puerto Vallarta.

Have new information to report, photos to submit, or even questions?  Contact Us.